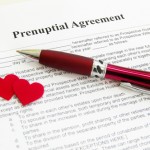 Most people assume that prenuptial agreements are only about money: One half of a couple has a lot of cash, and they don’t want the other half taking a chunk out of their assets should they divorce. Money certainly factors prominently in prenups, but there are plenty of other reasons people are saying yes to a prenup in Michigan to help prevent a divorce.

Here are just some of the surprising parameters and rules for marriage and divorce that couples have included in prenups:

One half of your union is addicted to Facebook or Instagram. One person posts obsessively and shares every detail of your life. A clause about social media in your prenup sets boundaries about how much time can be spent on social media, what can be posted about, and, in the event of a divorce, puts a legal limit on cyberstalking.

Get Insurance Against Addiction

If there is a history of drug or alcohol abuse by one or both people in a relationship, some couples include parameters about using in a prenup. There may be a clause about random drug testing, mandatory rehab for a slip-up, or the payout in a divorce should the addict start using again.

When Tony Romo and Jessica Simpson were dating ages ago, the NFLer reportedly requested a “fat clause” in their prenup. The athlete would leave the actress and singer if she gained too much weight, plus she would incur a financial penalty for every pound she gained over a preset amount. Brutal. But rather than look at this kind of clause as a “you must remain attractive or we’re getting a divorce” ultimatum, it could be incentive for a pair to stay at a healthy weight and consider fitness and nutrition an essential part of their union.

You can relate to high-profile divorces >>

Marriages can fall apart when couples start pursuing their own interests and do fewer things together, including having sex. You can make a contract about how often you will have a date night and for how long, how much time is set aside for couple vacations annually, how often you will have sex and what sexual preferences are permitted, and even how often couples will get tested for STDs.

Should you really trail your spouse with an app? >>

Besides the above, couples have included everything from pet custody in case of divorce to time spent with the in-laws, how often sporting events are watched on TV to where holidays will be spent. While it may seem counterintuitive to even bother with a marriage that has so many “rules” attached to it before it even begins, a prenup can remind people to make decisions that are in the best interest of their marriage and spouse, to honor their established parameters rather than acting impulsively. In most cases, an economic consequence is the result of breaking the prenup, which is legally binding and enforceable.

If you have questions about establishing a prenuptial agreement, enforcing it, or pursuing a divorce with a prenup or postnup in play, get the support you need from your Michigan divorce attorney. Contact Femminineo Attorneys, PLLC in Mt. Clemens, Michigan, to schedule your no-cost initial consultation.