‘Tis the Season for Wife Abandonment? 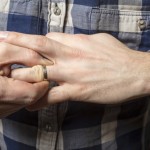 While many unhappy couples decide to stick it out for one last holiday with their family before splitting in January – also known as “divorce month” – in some relationships, the opposite occurs. A new survey found that nearly half of the men who abandon their wives do so over the holidays.

She thinks it’s cheating. He doesn’t. A Michigan divorce follows >>

The Reality of Wife Abandonment

Perhaps he can’t take one more family get-together. Maybe he just doesn’t want to fake it anymore. Or perhaps all that togetherness is just too hard to bear and the charade must end. But around Thanksgiving, Christmas, and New Year’s, wife abandonment reaches a peak.

The survey conducted by Montreal-based family therapist Vikki Stark, author of Planet Heartbreak, included 400 women whose seemingly happy marriages ended without warning when their husbands suddenly left the family nest. Forty-four percent of the men chose the holiday season – between November and January – to turn tail and run.

The ho, ho, horrible last holiday before you divorce >>

How to Know If He’s Planning to Leave Your Marriage

The most heartbreaking element of Wife Abandonment Syndrome is that, in most cases, the women did not see the abandonment coming. The shock of the husband’s departure and being blindsided by the fact that something was wrong can be numbing and leave a woman wondering how she missed the clues.

Stark compiled a list of signs that indicate a husband may be secretly planning to leave the marriage:

While this change in your circumstances may leave you at a loss at to what to do about your family and marriage, you would be wise to consult with a divorce attorney to answer your questions. You may feel stuck in quicksand and not know where to turn, but taking that first step of getting support and advice from a professional who understands all the innuendos of divorce can help you take charge of your life and new situation. Contact an experienced Michigan divorce attorney at Femminineo Attorneys in Mt. Clemens, MI, to schedule your no-cost initial interview.