Study Says Men Are More Likely to Drink After Divorce 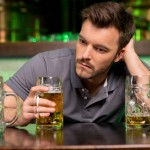 Some people throw themselves into a new hobby, new job, or new relationship after a divorce. Other people throw a party and, studies say, men are the most likely candidates to keep that party going – at least the drinking portion of it.

According to recent findings by the University of Cincinnati, men are more likely than women to drink after divorce. (Interestingly enough, women are more likely to drink more while married – typically to keep pace with their husband’s drinking habits – and usually go back to drinking less after a divorce.)

Perhaps men fall into the “drink more” category because they are searching for a way to deal with the divorce. This major life changes alters their existence mentally, emotionally, and especially financially. Choosing not to seek counseling or support when dealing with a costly and draining divorce may have men seeking out alternatives to deal with the stress and unknowns.

Are you a divorced man in Michigan? It could impact your health >>

The Role of Alcohol in a Michigan Marriage

Not surprisingly, marriage and drinking doesn’t make for a great cocktail, unless both spouses like to regularly have a few. A recent paper by the University at Buffalo Research Institute on Addictions (RIA) found that couples where one spouse is a heavy drinker have a much higher divorce rate than couples where both spouses drink heavily (or drink lightly, as the case may be). The findings show that it’s the difference in drinking habits that are more likely to lead to divorce, rather than the amount of drinking that’s done.

Close to half of the couples studied, in which only one partner drank more heavily than the other (six or more drinks at one time or drinking to intoxication), ended up divorced. The divorce rate for other couples was only 30 percent.

Ultimately, while the aftermath of divorce may differ for men and women, the study found that alcohol use is more deeply related to the stress in a person’s life. Divorce merely exacerbates the stress and thus, potentially, the drinking habit for men. Having an understanding and experienced divorce attorney on your side will enable you to successfully navigate the waters of divorce. Work with a Mt. Clemens, Michigan, divorce attorney. Contact us to schedule your no-cost initial interview.