Get It in Writing: 6 Crazy Real-Life Prenups 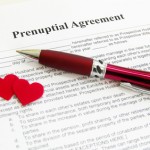 Prenuptial agreements are not just for the rich and famous, and they aren’t just about money. Plenty of couples are setting the tone for their marriage by setting ground rules for each other when it comes to social media, infidelity, weight gain, and more. The irony is, many of the following issues were once the things that couples talked about before marrying simply a matter of course. Are we all so untrustworthy now that legal documents of “do this or else” have to be drawn up for people to keep their word?

Social media addictions are very real, and given that Facebook and other social media sites can really wreak havoc in a relationship, couples are putting limits on how much time their significant other can spend on Facebook and determining what is ok to post and what’s not.

Nothing comes between a guy and his favorite sports team… except maybe a prenup. Some men have apparently agreed to limits on their football watching. Perhaps a better route to take would be agreeing, as a couple, to spend just as much time together as he spends watching sports.

‘Til BMI Do Us Part

Alas, some couples are putting a limit on how much weight a spouse can gain. Maybe it’s an effort to keep each other healthy and in shape and in the marriage for the long haul, but worrying about what eating an extra helping of dessert could do to your relationship might just backfire and end up being a recipe for disaster.

Time for the Nookie

Worried the flame will go out in your marriage? Some couples keep the passion alive – and try to discourage infidelity – by signing a prenup that dictates sex frequency in the relationship. Likewise, there are also dating clauses in some prenups, requiring spouses to spend a specified amount of time alone with their significant other each week, no smartphone, no TV, and especially no work.

Even though the law addresses child support, there are baby payout clauses in some prenups saying the woman will receive a certain amount of money for every child the couple has together in the event of a divorce. It’s rumored that Beyonce will collect a cool $5 million from Jay-Z for every child they have together.

4 of the worst celebrity divorces >>

You Marry a Family

In-laws can, have, and will continue to interfere with many a marriage, which is why there are couples who denote just how often in-laws will be able to visit, when, and for how long.

Need help reconciling your prenup as you prepare for divorce? Contact Femminineo Attorneys in Mt. Clemens, MI, to schedule your no-cost initial interview and get the divorce advice and help you need.