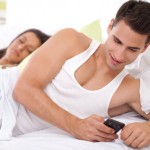 Are you snuggling on the couch every night checking your Twitter feed or putting down the smartphone and instead getting cozy with your spouse? A new study published in the journal Computers in Human Behavior presented some interesting findings about the levels of happiness and contentment in a marriage and social media use. In short: If you’re spending more time on Facebook than you are face-to-face with your significant other, divorce might just be imminent.

Sites like FacebookCheating.com, which allow people to post about relationship implosions prompted by social media usage, make it clear that a person’s frequency of logging can certainly lead to divorce. In every model analyzed in the recent study – which compared state-by-state divorce rates to per-capita Facebook accounts – there was a link between social media use and decreased marriage quality.

The analyses done on the states found that a 20 percent annual increase in Facebook enrollment was associated with almost a 5 percent increase in divorce rates. And get this: Individual survey results predict that a person who does not use social media is more than 11 percent happier in their marriage than a heavy social media user.

Addiction has been the downfall of many a marriage, but now there is more than just alcohol, drugs, or gambling – there is addiction to social media, which even just a bit of dabbling in can create marital strife. Enter the ingredient of reuniting with old boyfriends and girlfriends and the environment is rife with opportunities for flirting, suggestiveness, and alas, in many cases, the breeding ground for the start of extra-marital affairs.

The study’s authors wrote: “Although it may seem surprising that a Facebook profile, a relatively small factor compared to other drivers of human behavior, could have a significant statistical relationship with divorce rates and marital satisfaction, it nonetheless seems to be the case.” The researchers hypothesize that people who are already in troubled marriages may be looking to social media for support or as an outlet, diversion, or sounding board.

If infidelity – whether online, offline, or both – has led your relationship into divorce, contact Femminineo Attorneys in Mt. Clemens, MI, to schedule your no-cost initial interview.